Things That Should Be Weird But Are Not

Yesterday:
I tried (but not very hard) to catch a piglet in our yard. I talked to a grown man who was working in his underwear. I walked through banana fields, crossed a river, and came head-on with a small herd of goats.

I tramped over narrow, thorn-covered paths. At one point, I stopped briefly to have a conversation with a lady about the size of her cow. Bon bef! Shortly after, I was offered avocadoes by a group of boys that I had just met; the same group of boys who had clearly been working very intently at knocking down these alligator pears by throwing rocks into the trees. I graciously declined and hopefully did not offend them by doing so. (I tried to say that they should eat them.) They must not have been too upset because they were still willing to smile for this photo-op. 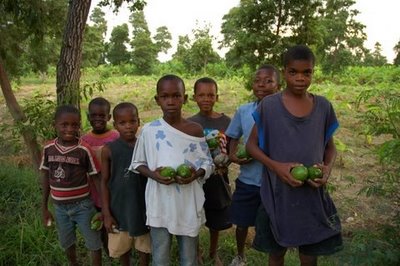 I later met a man on the path. Well, he was on the other side of the canal, working in his mini-field. He called out to us and seemed to know my dad by name. That doesn't seem too unusual; afterall he is the only white male within miles. We had a little chat, in which my dad at one point stated a Haitian proverb like it was no big thing.
The man had commented about how he was still working (close to dusk) while we were out for a 'ti mache' (little walk). The proverb translates to: The donkey works while the horse gallops. That could have been offensive to the working man but he liked that my dad was speaking in Haitian proverbs and laughed with us at the joke. Conversation complete, we continued on our merry way.

The small detail that I was not consciously aware of is the fact that this man was only in his (very white) underwear. He was working, watering his field with an old culligan bottle at 6pm in his undies. I didn't really think much of it at the time, until my mom later pointed out that this was really rather strange and something that I would have thought awkward only 9 months ago. I wonder what else is abnormal that I am unaffected by these days.

There is one thing that will always be abnormal and extremely uncool to me.
Foreign creatures in my bed. In my bed, while I am in it. One such creature started to crawl up my leg the other night. I quickly grabbed it and flung it on the floor. Or I thought I did. Moments later, I realized my failure when the same creature exited the top of my pajama shorts. I tried again, this time successfully snatching and chucking it away from my now extremely violated and disgusted body. Moments pass ... I am trying to calm down and not think about what the creature actually was. I then felt a second stranger crawling, this time up my back.

The identity of the first creature - that crawled under my pajama shorts - was later confirmed by the dead, 2 and a half inch lizard on my floor. The other's identity remains unknown. 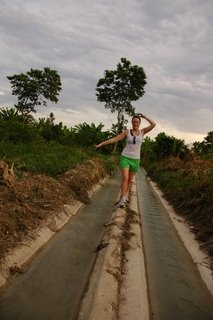 ~Britt, the goat confronter, and the girl who talks to underwear-clad men with ease but ... definitely moved to the couch when a lizard chose to attack her.
at Thursday, October 05, 2006