So, you might be asking yourself, 'What do the rest of these people who are not stitching, running around listening to needs or amputating fingers do all afternoon?'

It's simple really. We just sit at the top of the stairs and watch Troy, Britt, Paige, Jamie and Sharon work. It's exhausting. ;-) The server comes by for our drink & hors d' oeuvres orders at the top of each hour. Good thing - or we might not be able to be sooo supportive. ;-) 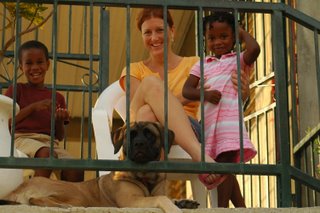 We had a busy day, everytime I looked down three hours had passed, we accomplished much, so much that I don't even feel bad for missing my run today. If every day was as busy as today, we'd all be dead by now. (Thankfully Britt has no classes this week.)

I think they saw 15 patients, four of whom had stitches done and two who had pieces of bones cut out of their hands. We turned a few away because after ten hours of standing up the medical gurus were ready to call it a day. Lazy butts. All of this took place in the cool breeze of another 98 degree day. Ack.

I promised our church, especially one opinionated and scrappy guy named Dave Foy, that it would not be too hot in December ... I am hoping not to become a liar --- but right now it's not looking good. Who knew October would be hotter than July?

We cannot express what an encouragement it is to have J and S here ... to know that they could have spent their $1200 in airfare to go anyplace else in the Caribbean and beyond, but instead they chose US, that is just way too cool. So, knowing that our church, my parents, and other friends are also headed south in the coming months ... we're just slaphappy.

Who else wants to come?

We have spent the last many months training our children not to leave lights or fans on if they are not in the room. (Electricity here equals expensive diesel fuel to run a generator. The generator charges batteries. The less electricity you use, the longer the batteries last.) I believe tonight I have proof of successful training.

Jack-Jack walks into the bathroom and flushes the toilet, for no reason at all. 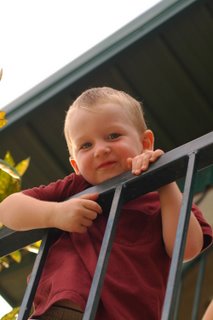 Have a great Tuesday!