(It's a Bad Week for Fingers)
By Britt:
Today I sent a really badly infected finger to Lori in Cazale. I don't have any pictures that are worth showing ... the story is that he got a splinter under his fingernail while making charcoal about a week ago. He told me he removed it himself. Shortly after, the finger started swelling up and eventually two little points on his fingertip broke open, leaking out pus and blood. From talking with my doctor friends/connections, it sounds like there is probably still a fragment(s) of the splinter left and that is what causing the inflammation and pain. One probable idea was that he has flexor tenosynovitis which was described to me as 'basically an infection of the flexor tendon sheath of the finger.' Whatever it is, it is causing Simeon a lot of pain and I don't have the skills or the tools to help. Lori, my nurse friend in Cazale was sick yesterday, so please pray for her. I hope together we can get this particular finger problem figured out.
Onto the next issue .... WARNING: What I am about to tell you may be overly graphic. It may paint a picture in your mind that you do not want to be painted. But if you are not getting a visual and care to view it for yourself ... then scroll down. Seriously, it's bad. So I will not tolerate any complaints about the goriness because you've been warned! But I've heard that some people have a piece of paper ready to cover up the photo and then are still able to read the story. That may be a good idea tonight. 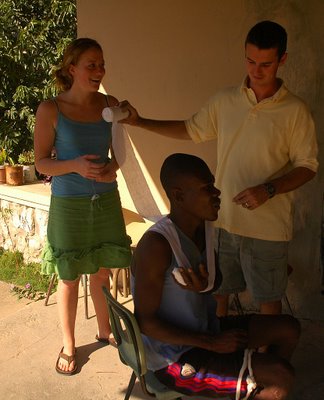 Alright, now that we've got that cleared up, for those of you who are not wimps ... this is the story. For any of you who have traveled to Haiti, most likely you have visited a market. You understand that in going to the market, you are signing yourself up for issues ... the smells, the overcrowded-ness, the variety of animal parts, the dirt, the bugs ... you know. Keeping this in mind, I'd like to tell you a story about Msr. Pierre Philipe. Yesterday was market day in Archaie, the closest 'big' town to us. He was walking in between two tap-taps. From my understanding, they were very close and started to pull forward and in doing so, crushed poor Misye Pierre's finger. But not only did they crush it, they mangled his ring finger. It was bleeding very badly, and was crushed at the last knuckle. He went to a clinic in Archaie that amputated the finger after the last knuckle. He said that they numbed it, so that is good. But ... otherwise I don't really have anything to say nice about it. Maybe it was so mangled that nothing better could be done, but I (wrongly) expected better. They gave him a piece of paper with prescriptions to take to a pharmacy to buy ibuprofen and amoxicillin. Also, it is common in Haiti (actually I think this is almost always the case) for a clinic to give the patient the list of supplies they will need to buy in order to get their bandages changed. So also on the piece of paper was betadine, tape, and gauze.
Pierre lives right here in La Digue. He explained to me that he heard of someone 'ki fe pansman' (who does bandages) in this area. That someone happens to be me. So here I am with this horrid finger. I am so thankful that our friends James & Sharon are coming on Saturday, because they both happen to be doctors. They help me a lot. But woot woot to this perfect timing. It concerns me because of the closeness the bone has to the surface ... basically it's just that scab separating the tip of the bone and the open air. Not good. So today, I gave him amoxicillin, ibuprofen, and some benadryl to help him sleep (someone coming down soon, tylenol PM is an idea.) I was wincing the whole time I was cleaning it ... because this has to hurt SO bad. I'm praying that nothing happens and that the antibiotics work, especially until my smarty-pants friends come to the rescue.
The above photo is us trying to figure out how to fashion a sling. He had one when he came, but it was just a necklace with his hand slung in it - it looked uncomfortable. But I don't know that we did much better, Where There Is No Doctor gives an example but I think we are kind of sling-makingly challenged.
And I said that I was experiencing a lack of interesting medical cases ... It never takes too long: 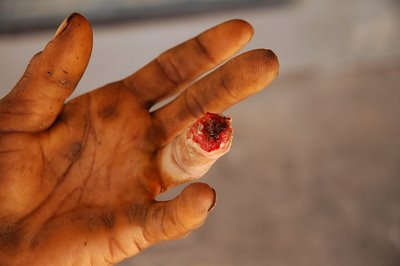 The good news about fingers is that one from Saturday, the thumb, is healing very quickly. I am really surprised. I think she may have pulled a tendon or something, because she can't move her thumb very easily. But the cut is healing really well. I was able to share with her today about the reason the word on the street is that 'fi nan Lifeline, li gen bon men.' They say this: 'that girl at Lifeline has good hands' ... which I think is kind of weird, but I was able to share with Viejeli that I try to pray every night before I go to bed for each of my patients. And seriously you guys, the only reason I have had such success is because of this factor. And, by sharing the stories with you, you guys can pray too.
This is such a difficult place for healing to take place, in more ways than one. The cuts/burns that heal are nothing short of a miracle because of all the factors (dirt, sweat, dirty water, ect) going against them here. I may have 'bon men' but it is only because God is doing the work for/through me. Seriously, I know nothing, but somehow it almost always works out. Mwen se rekonesan pou fos de laprieye. I am thankful for the power of prayer.