(Little Operation)
By Britt (written Wednesday night) :
This morning I tracked down a few people for bandage changes and also saw a handful who came willingly. ;) When I say tracked down, I mean I sent someone to go find them and tell them to come get their bandage changed ... or else. Just kidding; but sometimes I just have to do this or it will be three or four days in-between dressings and then things will have gotten infected, ect. So yes, that is how I started out the morning and was done by about noon.
But at noon, we did something really fun. Sharon and I removed a lipoma on a 13 year old boy's finger. A lipoma, as I learned today, is similar to a cyst but a little different. Cyst's are hard on the outside and usually have a fluid on the inside, where as lipoma's are the same throughout. It is basically a fatty mass. But this link describes it really well. Here is the before picture: 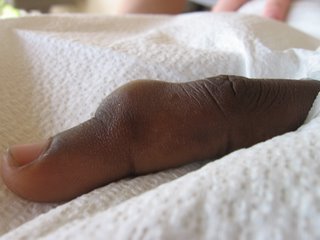 First I did a digital block to numb it up (the site I linked to is awesome - explains the digital block really well), but then I ended up needing to inject on the surface of the actual mass as well because the digital block wasn't 100%. After that I cut with the scalpel, a straight shallow incision right down the middle of the lipoma. Here is what it looked like after I made the incision: 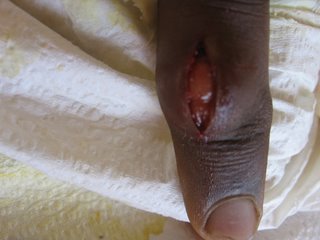 The next step was to loosen up the connecting-tissue around the lipoma, in order to extract it. That was done with hemostats, going in with them closed and then opening up. This took about 20 minutes, until it was all the way loose and the skin had been pushed down underneath the mass, so that it was sticking out, ready to be removed, like this: (picture will not load so look for it in the post below)

The skin had been stretched and lengthened as it was growing as the lipoma grew, so we found that the skin was thicker than normal and a little harder to suture at the end. I learned how to do running sutures ... I know they're not the prettiest things, but it was my first time so hopefully I will improve. Running sutures are not necessarily ideal here because if one breaks, then you're done, they all loosen up and are pointless. So this is why we practiced on a finger, rather than an ankle where there would be more movement and more chances of breaking a stitch.

This was by far my favorite thing. I liked amputating the fingers, but this was more enjoyable, maybe because it wasn't absolutely necessary - it was his choice to get it removed. Plus I think there's always going to be a little scariness when clipping someone's bone. :) We're not sure how/why this formed, there could be many different reasons for it. He says that he's had it for three weeks, but our guess is that that's when it has really been growing quickly and when he noticed it because usually they take longer to form. He was happy when it was all over. Although I said it was not a necessary operation ... he said that it did give him pain like when he wrote or brushed his hand up against something. I love this: he took the fatty peanut-sized mass home to show his mom. How funny is that?

So ya, not like I'm going to sign up for any major huge cyst/abscess/lipoma ... but I would say that after today, I would feel comfortable in the future removing small ones like this.